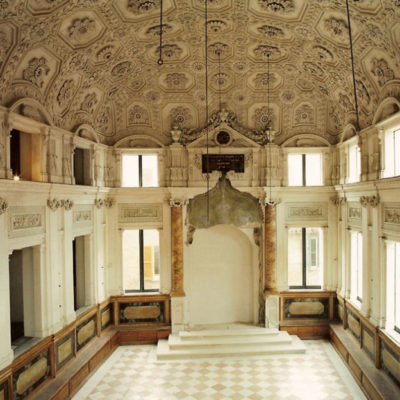 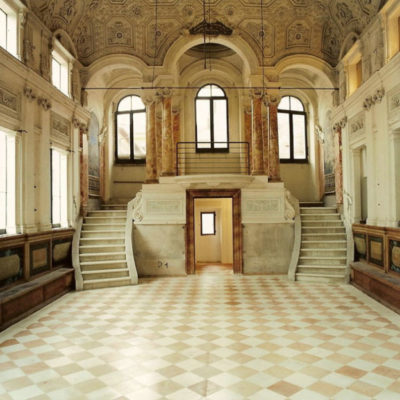 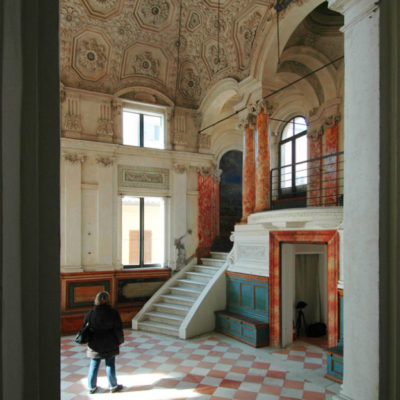 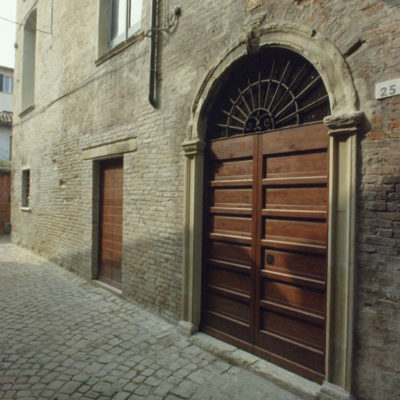 The Spanish synagogue was founded in the second half of the 16th Century by the Iberian group who settled in Pesaro at the beginning of the century. Funded by philanthropist banker Mordekhay Volterra, the synagogue brought together such high-level scholars and figures as Amatus Lusitanus, physician and writer of treatises, and his brother Didacus Pyrrhus, poet and man of letters.

As was customary at that time, the synagogue was not recognisable from the outside. The main hall, located on the first floor, was accessed by a small central door on Via delle Scuole; a side door led up to the double women’s gallery that ran along the long walls overlooking the main area. The hall, abandoned, run-down and unsafe, was dismantled and part of the furnishings were moved to other communities. In 1970 the aron and the carved and the gilded wooden balustrade of the tevah, made in 1708 in the workshop of Angelo Scoccianti, were moved to the new synagogue of Livorno and the Levantine synagogue of Ancona, respectively; the screens of the women’s galleries are now in Jerusalem. In the prayer room, now restored and used for cultural events, the bifocal layout remains recognisable. On the east wall the profile of the aron (now removed) can still be seen, while on the opposite wall over the entrance is the imposing structure of the tevah. At the top of the two staircases leading to the podium are two 19th-Century trompe-l’oeil, framed by false windows, depicting the Temple of Jerusalem and the Tent of Meeting (subjects reinterpreted in a local landscape). Visible among the stuccoes of the lacunar vault are oak branches, possibly a tribute by the community to the Della Rovere family [rovere is a species of oak, TN].  On the ground floor, services still preserved today include the mikveh and the oven for the baking the unleavened Passover bread.