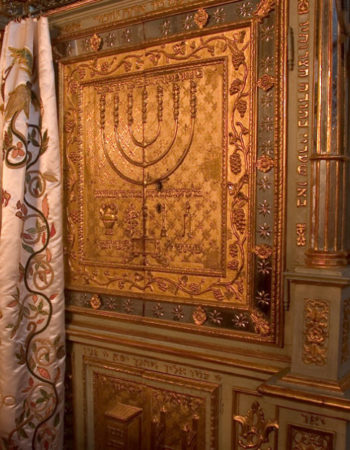 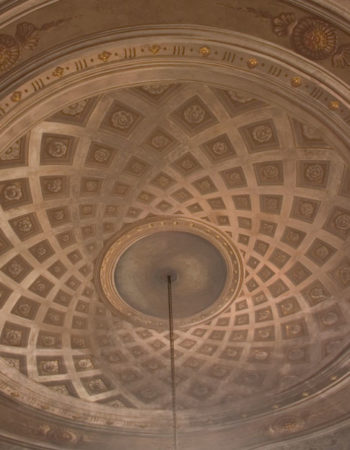 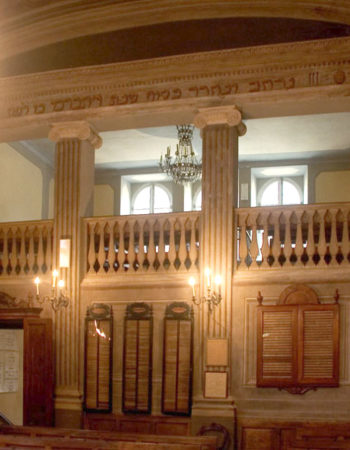 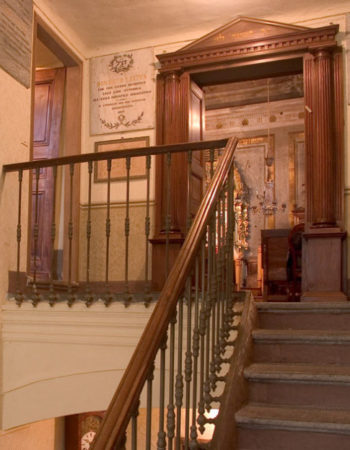 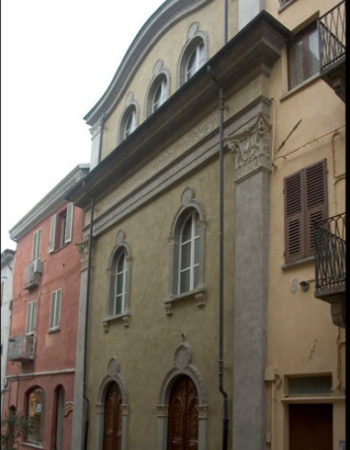 Housed for centuries in the same building, the synagogue of Cuneo was extensively renovated after the Emancipation and took on its current configuration in 1884. The building, set in the courtyard of one of the low houses in the Contrada Mondovì, was given a new facade outwardly manifesting its identity as a synagogue, which in earlier periods had not been allowed. The frieze of the entablature carries the verse from Exodus: “Let them build me a sanctuary, and I will dwell among them.” The hall of the synagogue is situated on the second floor; its walls are decorated with elegant frescoes and the ceiling is painted in a technique of illusionary perspective with a false dome. Like many of the synagogues built or renovated after the Emancipation, its layout is inspired by that of Christian churches. It has three sections of benches lined up in parallel rows facing the tevah and aron, which are placed together in one single raised area enclosed in a sober columned balustrade in natural wood. Dating back to 1783, the particularly prestigious aron in Baroque style has doors finely decorated with a large central menorah and the sacrificial instruments of the Temple of Jerusalem.

Below the elevated pulpit (another element borrowed from the Christian model and dating back to the last renovation) a cannonball remains lodged in the wall where it hit the synagogue premises during the Austro-Russian siege in 1799 but failed to explode. To commemorate the lucky escape, the Community established a special anniversary celebration known as the ‘bomb Purim’

In the courtyard of the building there is still the ancient oven used for baking the unleavened Passover bread. On the first floor are the Community classroom with its original furnishings, and the Davide Cavaglion Library and Study Centre on Jews in Piedmont, which is listed as one of the local public libraries.