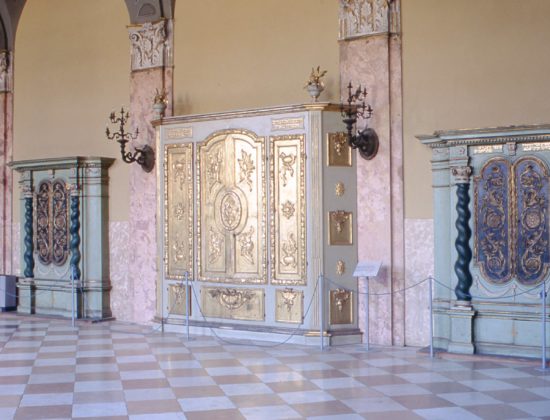 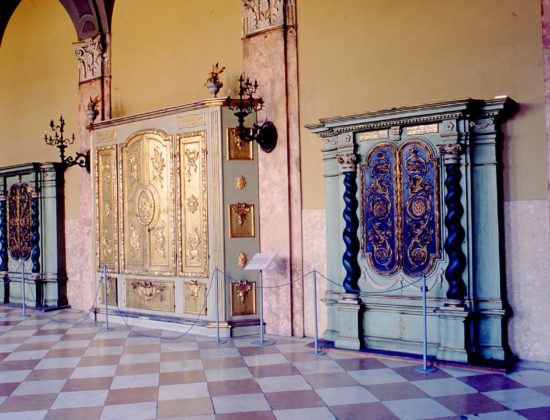 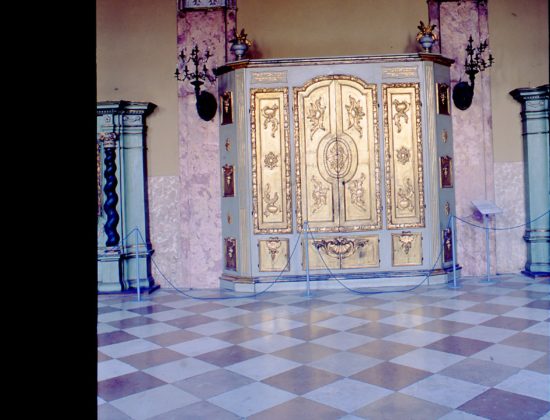 An Italian rite prayer hall has been there since the early 15th century, the longest standing Italian synagogue not to have changed premises. It was privately owned, like all of the city’s at that time, and was associated to the Sabbioni’s pawnshop. It became public when the wealthy benefactor Samuele Melli purchased the building so that Ferrara’s Jews would have a place to officiate. In his will, dated 1485, Melli bound the gift to its use even after his death, so that it could not be sold, except to transfer it to more suitable premises and ever since then the building has been used as the community’s centre & offices.

The Italian Synagogue’s Hall was renovated and expanded several times: it originally occupied but a small section of its current floor space, next to the wall where the entrance is now located, that bears a plaque summarising Melli’s will. The Hall most likely reached its current size in the late 16th century and was renovated to the present state following the Emancipation of Jews between 1865 and 1867, under architect Ippolito Guidetti. The large frescoed ceiling was painted by Francesco Migliari; the tevah was moved in front of the aron ha kodesh, with the public seating facing it in parallel rows, according to the most popular layout of the time, that is resembling the majority of Italy’s (Christian) places of worship at the time.

Following the 1940s devastations, the synagogue was not restored and was readapted as a multi-use hall. Only a few parts of the imposing aron have been preserved, reorganised as a single item. On one side there are the lateral compartments of the aron which belonged to the Scola Spagnola (Spanish rite synagogue).

As time went by many other community institutions were set up alongside the Italian rite temple: two synagogues (the German and the Fanese), halls and offices, the historical archive, the rabbinical school and court; some of the furnishings of the latter have been rearranged in the entrance hall of the former Italian synagogue.

Currently closed to visitors due to restoration work following the 2012 earthquake.