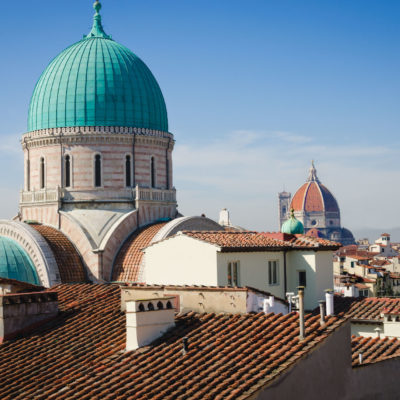 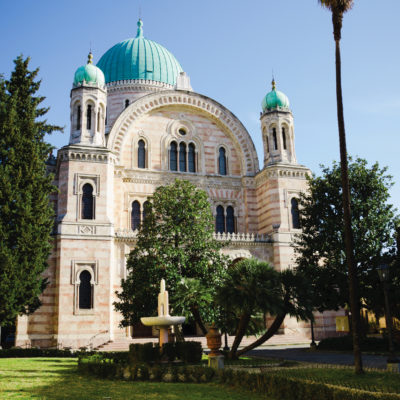 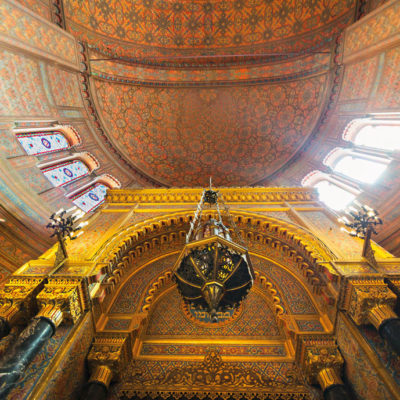 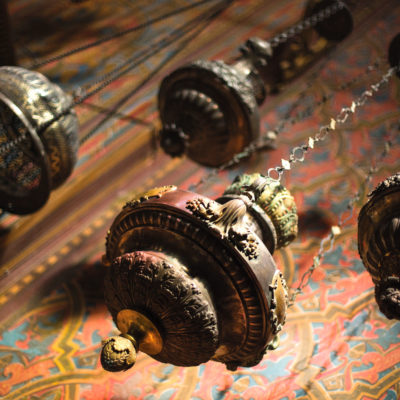 The new Israelite temple of Florence was completed in 1882, to a project by the architects Treves, Falcini and Micheli. It was situated far from the old ghetto in the Mattonaia area, close to the city walls, a space which had thus far been occupied by orchards and gardens.
The building is a fine example of Emancipation synagogue architecture. Its monumental forms make it stand out and affirm the integration of the community within civil society, and the achievement of equal rights.
The design research carried out with a view to expressing the identity of the place led to an eclectic architecture which combines Moorish, Romanesque and Byzantine elements, and makes it distinguishable from nearby religious buildings.
The large garden to the front was originally planted with exotic species. The building’s exterior is clad in white and pink stone. A portico with three horseshoe arches leads to an atrium, which extends the full width of the façade. In the left-hand tower a lift has been installed, which provides access to the women’s gallery and the museum rooms.

The interior is richly frescoed with arabesques and geometric patterns in warm colours. It has a rectangular plan, a barrel vault ceiling and a large apse. The granite columns which divide it into three aisles support the women’s gallery which runs along three sides. The original longitudinal layout of the furnishings, in imitation of churches, placed the officiant’s podium within the separate section of the aron; today, the tevah has been transferred to a central position and the pews are set facing it.

Via Luigi Carlo Farini 6, 50121, Florence
Included in the visit to the Jewish Museum of Florence.